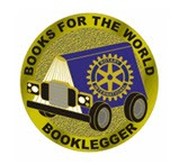 Mission Statement:
Books for the World is a global literacy project, supervised by Rotarians, that puts used books from the United States that might otherwise be discarded into the hands of children in other countries where educational resources are in short supply.

The majority of schools and organizations that benefit from the book project face a grave lack of materials, with many teachers saying they have never had books to teach from. Many children whom this project reaches have never even held a book, let alone learned how to read one. The overall goal of this project is to enhance literacy while also promoting international understanding.
Our Beginning:

The project was started in 2000 by two Rotarians, one in Texas and the other in South Africa. These two individuals began talking about a possibility that arose from the fact that Texas schools were disposing of thousands of text books every year and South African schools were desperately in need of books. Within a few years, hundreds of volunteers were involved, and today the program serves 25 countries in southern Africa, Central and South America, India, Afghanistan, and Pakistan. To date, over 3,250 tons of educational resources have been delivered.

The Wisconsin Books for the World began with the support of the Rotary Club of Madison-Breakfast in 2007 shipping 8 pallets of books.   Today, we ship 10 full semi-truck loads or about 260 pallets of books each year.


Through 2014, the Wisconsin Operation has shipped over TWO Million pounds of books with an estimated used value of $20million.  The books have been received from more than 200 schools, 15 libraries, and 5 book resellers in the state. Most of these were shipped to Houston, Texas to be forwarded to distribution sites around the world.